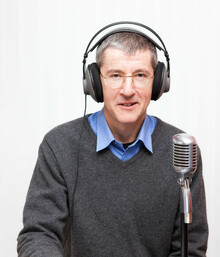 From the very beginning it was obvious that I was going to work with languages. I had an aptitude for them. First, Latin (9 years) and French. At the beginning of the 80s I was still interpreting regularly for my father's company and our French and Belgian customers. At that time, German was really just one of the many languages I toyed with: Russian, Icelandic, Spanish, Dutch, Korean, Serbo-Croat, Esperanto ... . Most recently also Welsh, a truly wonderful challenge!

In 1985 I emigrated to Germany for private reasons and quickly took hold of the language. After having taught English to adults for four years, I went independent as a translator.

In the meantime, my French has sadly fallen into disuse, which means that I no longer offer translations for money any more*. It has been displaced by German completely. Some 30 years in the Federal Republic have made me aware, time and time again, that I am just as much in love with the German language as I am with my own.

* Having said that, this very good knowledge of French often gives me a kind of triangulation advantage when I'm translating an original German text into English, either because I receive a finished French translation together with the German, or have the chance to liaise with a French colleague.